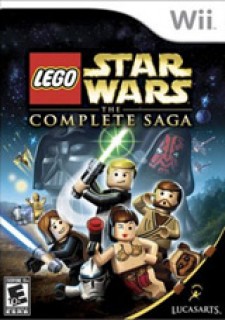 Building on the success of both LEGO Star Wars videogames, LEGO Star Wars: The Complete Saga enables families to play through the events of all six Star Wars movies in one videogame for the first time ever. From the Trade Federation's "negotiations" with Obi-Wan Kenobi and Qui-Gon Jinn in The Phantom Menace to the space battle above Endor in Return of the Jedi, The Complete Saga allows players to kick some brick through 36 Story Mode levels, including Episode II's newly added high-speed pursuit of bounty hunter Zam Wessell. Traveller's Tales has revamped levels from the original LEGO Star Wars to match the gameplay evolutions found in LEGO Star Wars II, and Prequel Trilogy characters can now be mixed and matched with those from the Original Trilogy -- more than 160 in all. Features include new playable characters, an upgraded character customizer, and new bonus levels.