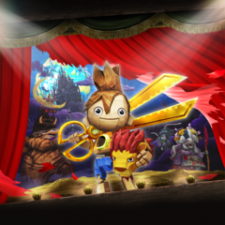 One dark moonlit night, a young boy named Kutaro was carried away by the maleficent Moon Bear King to a black castle where the unlucky lad was transformed into a puppet.Kutaro displeased the terrible tyrant, who devoured the boy's wooden head and cast away his body. But the headless hero was not alone, for he had discovered a very special pair of scissors to help him on his harrowing adventure to find his head, and his way home.Puppeteer is a brand new franchise developed exclusively for the PlayStation®3 system by SCE JAPAN Studio. Set in a magical puppeteer’s theatre, this title will introduce you to a strange and fantastic world, where the environment is constantly changing. Players will enjoy a rich, dark fairytale where surprises lurk around every corner.PS3 system software v3.65 or higher, HD 3D display with compatible 3D active glasses and highspeed HDMI cable (sold separately) required for 3D features. Visit www.us.playstation.com/support/3D for details.