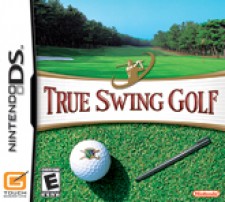 You want a golf game that actually feels like a golf game? Step onto the tee box and take on True Swing Golf, the revolutionary golf game only for the Nintendo DS.

Whether you're a casual golf fan or a die-hard ball striker, you'll be impressed with True Swing Golf from the moment you tee off. From course design to the challenge of the gameplay, True Swing Golf is the game golf fans have been waiting for.

All in the Swing
Since the golf genre came into its own back as far as the NES days, one mechanic has stayed constant: push the button once to start your swing, push it again to determine power and push it a third time for your accuracy. That's a lot of buttons when you consider hitting the ball in True Swing Golf comes down to one stylus stroke.

Anybody can draw a line; so anybody can swing a club in True Swing Golf. Simply start at the point that will give you the optimal distance and stroke through to the ball on the Nintendo DS touch screen. The two factors that most affect your shot are how fast you stroke through and how square on you hit the ball. If you don't hit the ball at all through your follow through, you'll actually whiff on it. If you don't hit it square enough, your ball could slice or hook away from the fairway or green. The swing mechanic doesn't get any more simpler or precise.

Reading a green can be monstrously difficult and at times unfair in golf games. True Swing Golf has simplified the physics of the putt (to a degree) and focuses on your ability to hit the putt with the right speed. The game helps you line up every putt with a red line. Especially on long putts on undulating greens, this plays a huge, helpful role. However, just because you know where to hit it doesn't mean the shot is easy. If you're hitting uphill, you'll need more club speed with your putter. Downhill putts call for a softer touch. The speed very much affects the break of the ball as it travels across the green. And of course, if you hit the putt too hard, you run the risk of lipping the cup or hopping out of it all together, turning your perfect shot into a tap in.

Creative, Realistic Course Design
Probably the greatest thing about True Swing Golf from a golf fan's perspective is that the course design is not only realistic, but well thought out. More abstract golf games would want you to drive a ball into a fairway that doglegs at a 90-degree angle or features so much water on the hole that you can barely find dry land to hit to.

True Swing Golf, on the other hand, focuses on the skill of golf. Can you hit your fairway? Can you avoid the fairway bunker? Are you going to approach the green on the risky bunker side or hit to the fat of the green and leave a long putt? Because of the fairness and challenge of the courses, you'll often find yourself thinking that par is a pretty good score. In addition to all the course designs, you're given a chance to play a mirror version of each course, making you rethink the way you played the course previously.

Multiplayer with PictoChat
With just one Game Card, you and up to three friends can play a friendly nine holes of True Swing Golf, or you and one friend can play a nine-hole match play event. (If you all have game cards, your options expand greatly.) The most fun part of multiplayer is the PictoChat integration. In a proper game of golf, etiquette tells us you shouldn't speak as a person addresses his or her ball. True Swing Golf lets you talk your smack without you actually having to say a word.

As your opponent prepares to hit the ball, you can give him or her some encouragement through PictoChat, which then appears on their top screen. Of course, they can repay the favor when it's your turn to swing, but depending on how good you are at comebacks, you might have the upper hand in the psychological portion of the game.

Goofy Pants, Shoes & Hats
You're not just golfing for the love of golf, are you? Then what are you going to do with all that prize money you win in tournaments, give it to charity? No way! You need some gear. The Golf Shop offers a variety of unique styles of pants, shirts, shoes and headgear that will have you swinging in style. You can also upgrade your equipment to become a better play, but sometimes it's better to look good than to play good, if you know what we mean.