A Space Shooter for 2 Bucks! for PSP 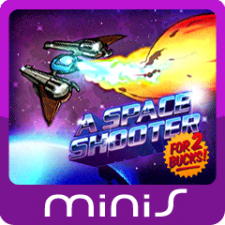 Ever wanted to play a game where you don't have to waste even one second on the tutorial? Where the only thing you have to do is destroy aliens, rake in cash, flirt with the shopkeeper and upgrade your ship to destroy even more aliens? Then A Space Shooter for 2 bucks! is the game for you! Plus, it's only 2 Bucks! That's like, the best deal EVER!

Embark on an epic journey across the stars to destroy X, the Supreme Alien God Emperor, and bring peace to the universe. Bah! Who're you kidding? You're doing this 'cause you get a tremendous kick out of blowing alien scum to smithereens!