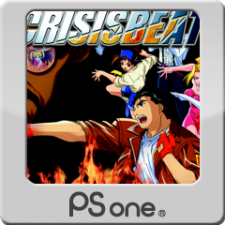 Prepare yourself for an action-packed, nautical thriller as CRISIS BEAT thrusts you into the middle of a terrorist hijacking on the high seas!
As you board the Princess of the Fearless cruise ship the last thing you're expecting is to have to save the day but that's exactly what you'll have to do as the ship is targeted by the most ferocious sea-jacking gang of terrorists in the history of piracy! Use your fighting skills as well as the objects around you to fight your way through the levels of the ship and defeat the enemy. A unique new Lock-On Counter system makes fighting and defending a natural and exhilarating experience and is essential in defeating some of the best end-of-level bosses ever seen.
Playing on your own is an intense affair but going through the game co-operatively with a friend is where the actiion really comes to life! You can even choose from one of four different anime-styled characters.
CRISIS BEAT is the ultimate 3D roaming action game for one or two players!