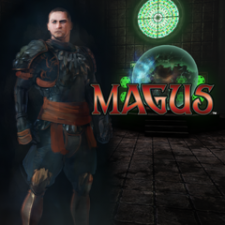 Since the creation of the world, and of mankind, obeisance to the gods and their whims was the focal point of the lives of all who inhabit the lands created by the divine. However, as the gods disappeared from people's daily lives, their power and influence began to wane, and cynicism and secularism replaced piety and belief.
Amidst the world's slow abandonment of the gods, a profoundly devotee and servant of the gods named Kinna infiltrated one the many prisons of the Waterfall Realm in hopes of finding one who would become a god. Encountering Magus, a prisoner who has spent his entire life incarcerated, she believes that she has found who she was sent to look for.
After claiming the powers that were his birthright and learning his true identity, Magus, with Kinna by his side, takes his first steps towards an unknown future.