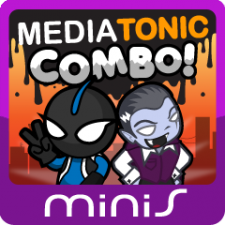 “Who’s That Flying?!” and “Monsters (Probably) Stole My Princess!” have been combined and unleashed upon the world!

In “Monsters (Probably) Stole My Princess!” you take control of the massively awesome and super sexy aristocratic demon known only as “The Duke” in an upwards-scrolling platformer where chasing down giant fleeing monsters is the business at hand. Build combos to unleash increasingly magnificent finishing moves on the (most likely) guilty monsters – and impress your adoring fans!

With “Who’s That Flying?!” you must blast through the world’s cities to fulfil your role as the “Guardian of Earth”, destroying foes in a side-scrolling shooter! It’s tower-defence meets shooter (with courtroom drama and intrigue!) doused in sheer awesomeness... AND THEN SET ON FIRE!

Download both titles as part of this super special bundle!