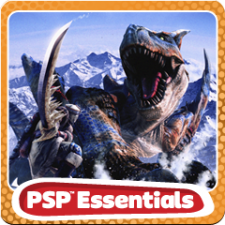 Compatible with PSP™ (PlayStation®Portable) only.

In a barbaric world, it's hunt or be hunted…

They fought for survival together, tracking the most deadly prey. Now, the Monster Hunters face their most dangerous challenge yet. With more action, more perilous monsters and a massive new land to explore – it's an epic challenge. In a world before time began, join forces to keep your freedom. In a land of danger, it's simple, but never easy. Hunt… or be hunted.

Epic action – Pursue over 70 huge monsters across breathtaking new landscapes in more than 270 quests. An epic action game twice the size of the original.
Fight for survival – Gather new weapons and armour from successful hunts, build your skills and fight to gain power.
Hunt online – four player wireless co-operative and battle modes. The adventure continues with over 30 additional quests available via infrastructure mode.