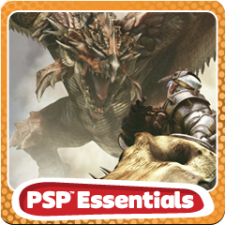 The most terrifying monsters… in your hands

The beasts roamed freely then… Some had teeth the size of a man, some were bigger still. But together, the Monster Hunters could defeat even the most ferocious…

Journey to a distant, dangerous land where monsters rule and survival must be fought for. For the first time ever, the epic Monster Hunter series is set free on a handheld console. With the power of the PSP™, face the challenge of a barbarian world alone or with friends.

Freedom to fight – Tackle the most fearsome monsters in teams of up to four players using the wireless connection.
Freedom to roam – The original Monster Hunter, massively expanded – with many new missions, areas and monsters.
Freedom to live – Deep, complex and rewarding gameplay. Collect special weapons, farm your land for vital items, unlock the secrets of Monster Hunter.