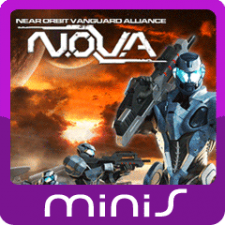 The hyped and bestselling sci-fi FPS now on the PSP™ system!

Join the fight for mankind's survival in this immersive space opera.

With Earth no longer able to sustain life, huge artificial satellites called “near-orbitals” were constructed for people to live on. To protect themselves, the near-orbitals banded together to form N.O.V.A., the Near Orbit Vanguard Alliance. Against his will, retired marine hero Kal Wardin is forcefully returned to active duty to prevent mankind's annihilation.