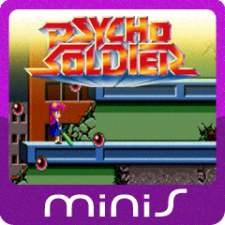 Sequel to ATHENA, and first appearance of the young psychic powered "Idol" schoolgirl Athena Asamiya! Get rid of the monsters from her hometown using her Psycho Powers! PSYCHO SOLDIER (originally released in 1987) is also noteworthy for being the first arcade game to utilize a vocal track during gameplay!