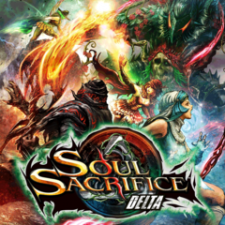 Soul Sacrifice™ Delta is the ultimate edition of Soul Sacrifice with a lot of new content and improvements. Grim, the faction who believes in neutrality in all things, joins the blood thirsty Avalon and the merciful Sanctuary, and adds a third angle to bring the Delta in Soul Sacrifice. Grim’s beliefs, rooted in the prophecy they will seek to realize, will bring about irrevocable changes to the world as we know it. The concept of faction is now at the heart of the game with players able to join the side of their choice, each with their own strengths and play styles. Players from each faction can now register their overall progress.

But there isn’t just more of everything; new Archfiends inspired by dark retellings of classic fairy tales, new sorcerers, arenas, spells and even more quests.
Many improvements to the game design and systems have been made as well: the graphics engine has been optimized, some arenas are now dynamic with weather effects and structural changes during battle, the spells system has been refined and allows for more collaborative and deeper gameplay. The AI of the Archfiends has been improved, who are now more vicious than ever. Finally, character customization has been taken to a new level, with the ability to mix costume parts and accessories.

DISCLOSURE REGARDING USE OF LOCATION: This game interacts with other applications that use location data (such as “near”). To turn off location data, go to [Settings] > [Location Data].