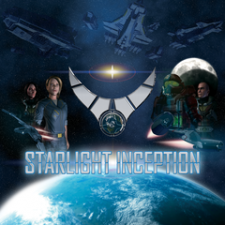 One hundred years from tomorrow...World War IV has started! Do you have what it takes to join the United Star Force and defend Earth and it's colonies from the relentless marauders of the Non-Aligned Nations? With a complement of over thirty spacefighters, bombers and transports with customizable weapons and equipment at your disposal, can you take the fight to the enemy and win back the Star System in the name of freedom? Assume the role of a young space fighter pilot assigned to the star carrier U.S.F. Midway (SCVN-41), deploy to hotspots throughout the inner and outer planets and win the last great World War!

STARLIGHT INCEPTION is a realistic and relevant first person / third person space combat experience with elements of exploration. It has a unique blend of action with an involving storyline. Features include ship based combat both in space and on planets and moons, interplanetary exploration, and multiplayer dogfighting.