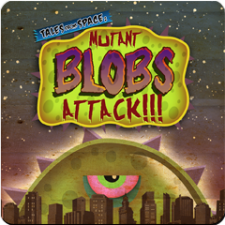 Tales from Space: Mutant Blobs Attack is a side-scrolling puzzle-platformer about an ornery mutant blob that, after being held captive in a lab that can only be described as something out of a retro sci-fi movie from the early '50's, escapes into the world and sets out on a path to consume everything! Use touch and the motion sensor function combined with traditional analog stick controls to defeat and consume the pathetic humans.
Key Features:
- Play through a wide range of environments, everything from a frat house to a metropolis
- Touch screen powers combined with traditional platformer controls
- “Tilt-a-Blob” bonus levels featuring gyroscopic controls
- Competitive Leaderboards and Trophies
- Retro-inspired art style
Eat your way to freedom.