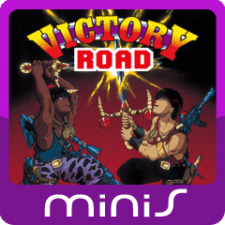 Famous sequel to IKARI WARRIORS, where they are caught in a time warp, and transported to another dimension to face Zang Zip, the War Dog, and his horde of alien monsters! New weapons such as swords, boomerangs, and bazookas will help you during your mission through space and time, in this classic vertical scrolling action-shooter released by SNK in 1986!