The Legend of Zelda: Oracle of Seasons for 3DS 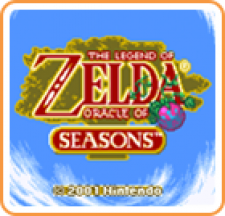 Transform the world around you with the Rod of Seasons, and create order from chaos. Stop a power-hungry general named Onox, and rescue Din, the Oracle of Seasons, to save the troubled land of Holodrum.

Change the seasons to overcome puzzling obstacles. If Link finds a small plant at the bottom of a cliff, change the season to summer, and Link can use the newly grown Deku Flower to boost up to the top. If Link faces a deep lake, use the Rod of Seasons to shift into winter, letting Link walk over the ice.

When played together, these two games offer an ultimate adventure not possible when each game is experienced on its own. The games feature a link system that unlocks access to additional content that you can't access any other way.