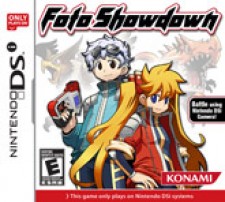 Use the Nintendo DSi camera to take photos that’ll spawn monsters and bring them to battle! As you win and grow, you’ll collect better cameras to snap more photos and create more powerful monsters! Adventure through a universe of over 100 levels snapping photos using the Nintendo DSi camera. Advanced color recognition will take your photos and generate monsters which you can take and battle other monsters throughout the game. Build your monsters, upgrade their powers and provide increased weapons and fighting power to wreak havoc on your duelist partners! It's an adventure that encourages creative photography, where the photos you take have lasting effects on the total gameplay.

• First title exclusively for Nintendo DSi to incorporate photography as an active gameplay mechanic
–Use the Nintendo DSi Camera to take a photo
–The dominant color in that photo corresponds to an algorithm that’ll span a specific monster
–You can take as many as 6 monsters into battle at a time
• RPG style monster battles and gameplay are perfect for kids of all ages
• The more you play the stronger you get and winning allows you to upgrade your camera equipment unlocking more options
–Visit the store where you can buy or sell monsters
–Purchase weapons upgrades, armor or medicine for your monsters
• Winning tournaments allows gamers to use their prize money to upgrade their monsters powers and purchase new more powerful capsules allowing for advanced monster collection
• Battle through single player mode or compete against friends and swap monsters via local wireless connection
• Compete to collect 4 types of cameras opening new monsters and new levels
–Cameras require capsules (film) to take new photos that’ll span new monsters
• More than 120 monsters to collect and over 100 different floors to explore